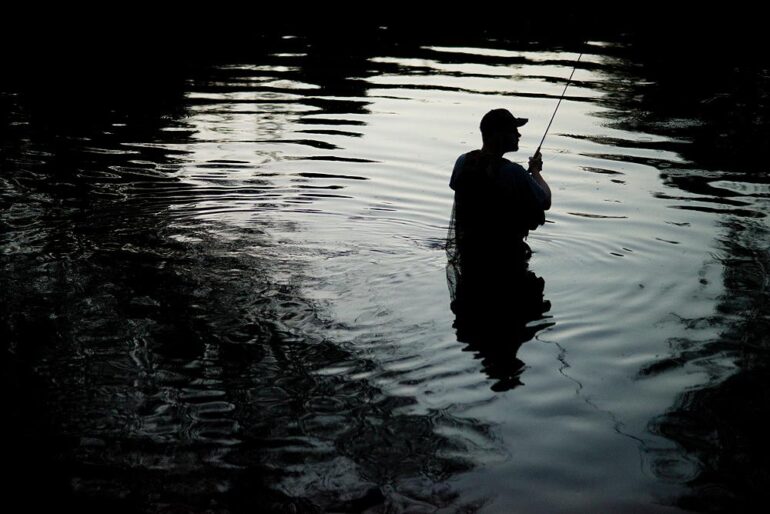 How Did I Get Here?

It was gone eleven, the air temperature had dropped and I could just make out the Daubenton’s bats surveying the shimmering water. I was in up to my waist, hoping the twang of an elastic band would dry my glow in the dark fly. There were no rising fish. I should have brought a jumper.

Then it struck me – at home there was a nice cold fridge with nice cold beer, and a nice warm bed with a nice warm wife. So then, why the hell was I stood in the River Usk twanging an elastic band?

What is a Spinner?

The spinner (or imago) is an upwinged fly in its final life stage. Upwing duns (subimagines) shed their skins to become spinners and can be distinguished by their clear wings and long tails.

After mating (usually towards the end of the day or very early morning), females return to the water to lay their eggs. Most lay by dipping the tip of their abdomen into the river at intervals or by sitting on the surface. Once they have released their eggs they usually collapse onto the water and die. As large numbers lie lifeless, the trout take advantage, sitting just beneath the surface, sipping them down at regular intervals.

Some species (usually Baetis such as Large Dark Olives) crawl down submerged plants and rocks to attach their eggs. They then move back towards the surface and can be eaten by trout in the process. I haven’t observed this feeding behaviour but have had some encouraging results fishing sunken spinners and spider patterns on summer evenings.

What Spinners do we Imitate in the Usk?

Spinners that can be important to dry fly fisherman on the Usk are summarised below.

This small, three-tailed olive is abundant from the first or second week in June and favours mossy sections of the river. Over the summer months, if conditions are right, the last hour can provide some of the best dry fly fishing to be had on the Usk. The fish usually respond enthusiastically to large B-WO spinner falls, and sometimes intense hatches, into the darkness. They sit close to the surface and, in faster water, the sipping rise forms can be difficult to see.

I use a few different spinner patterns, although my stock pattern is a fluorescent posted mahogany para-spinner (in sizes 16 and 18) that I have seen many anglers using including Stuart Crofts, Paul Procter and Matt Eastham. I have also experimented, with success, with CDC winged and curved shank variants. CDC patterns work well but are less durable than the standard para-spinner.

I used to ‘crank’ the shank of the spinner (as employed by Stuart Crofts to imitate a bent abdomen), but I no longer do this as the fly works without it.

I tied curved-shank variants after finding that a small Klinkhamer type emerger would catch in a B-WO spinner fall. This is because egg-laying females dip their abdomens in the water and many spent flies are partly (or completely) submerged. They also vary significantly in colour (mahogany, olive, black), have tails missing and often do not lie in the classic ‘crucifix’ position (see below).

I often omit the tail from my spinner imitations; after witnessing hundreds of B-WO spinner falls and examining many specimens, Paul Procter observed that many spinners have lost their tails and now rarely includes a tail in his spinner patterns.

On bright sunny days B-WO hatches can start thirty minutes before dark, coinciding with spinner falls. On some occasions, these hatches are of such intensity that there have been flies crawling in my beard and down my neck; I have even missed a couple of fish when B-WOs have flown into my eyes. Invariably, during these hatches, the trout switch from the spinners, and size 16 to 18 emerger patterns with a fluorescent green post, that is visible in low light, usually do the trick.

Our largest mayfly is usually present from the second week in May and can continue to hatch well into August. By the end of May, there are sometimes fish rising throughout the day. While hatching mayfly are often observed on warm afternoons, I have also witnessed large hatches later in the day with the most intense I have seen, occurring one early evening during the third week of July.

Some ‘old boys’ tell me that Usk trout don’t feed on Danica but, over time, I have observed increasing numbers of Danica mayflies (and trout eating them).

When fishing the lower middle Usk, I catch good numbers of fish on mayfly spinners, often having to change from my B-WO spinner pattern to tempt those responsible for the splashier rise forms. Mayfly spinner falls can last less than 30 minutes and usually occur in the last hour of daylight.

Danica spinners often do not lie flat on the water and can sometimes be seen twitching. I have had some success twitching both dun and emerger patterns, but usually, dead drift is best.

I use a few different flies to imitate these spinners, a white-bodied ‘Monnow may’ deer hair pattern (that I also use to imitate duns) and a CDC pattern with a foam overwing.

This large fly seems to be increasing in abundance on the Usk and is present from June to September. The trout on the lower middle river often eat the spinners and it pays to have a large spinner pattern in your box. To imitate these and other large spinners I use a split wing CDC & elk tied on a size 14 hook. Since being introduced to this fly by Dave Smith, it has become one of my favourites. It imitates spent upwings, spent sedge and chironomid and I carry it in natural, olive, yellow and brown in sizes 14 to 20.

These are medium to large flies with two tails. The female spinner is yellow and the male is a golden brown colour. I see them from the end of April right through the season, but the main period is May and June. Usk trout eat them in all of their life stages.

While it is mainly the females that we are trying to imitate I occasionally observe male spinners on the water and sometimes see males and females ‘tied’ on the surface. This occasionally produces a very splashy rise form and I don’t have a pattern to imitate!

While I occasionally see March Brown spinners, I have never witnessed a spinner fall – although a friend tells me he once saw one on the upper Usk where the trout responded enthusiastically.

This rare three-tailed species has been recorded on the Usk, Wye and Severn catchment only. It was once thought to be lost from the Usk but a few duns and spinners are observed most summers. I have included it here for interest only.

I occasionally see fish eating Olive Upright spinners and these can be present throughout the summer and I use a size 14 split-wing CDC & Elk to imitate.

There are a few small upwing spinners that are eaten by trout. To imitate I use small para-spinners in olive and mahogany and it can pay to carry a few size 18 creamy coloured patterns to imitate Small Spurwing spinners.

Many of the other small upwings (e.g. Baetis) that hatch on the Usk are less important to the dry fly fisherman in spinner form. They tend to crawl under the surface to lay their eggs and the spent flies are often washed away while submerged.

The image below was taken by Steffan Jones on the upper Usk and shows a Large Dark Olive spinner that he found beneath a stone in the margins. Note the creamy coloured egg masses on the stone.

Fish rarely respond to a spinner pattern with a hint of drag. I use very long leaders (up to 20 foot) with 5X tippet if I can get away with it, and 6X if I cannot. I typically employ short slack-line casts, and casting accuracy (including the distance the fly lands above the feeding fish), is important.

Spinner feeders usually lie close to the surface expending little energy in sipping down the abundant flies. They, therefore, have a narrow window of vision and do not need to deviate to feed every five seconds or so on the spinners carpeting the river. The further the cast is made above the target, the more likely the fly is to drag by the time it reaches the trout’s window. In slower water, I like to tackle spinner feeders almost square on giving them about two-foot ‘lead’ with an upstream mend. In faster flows, I land the fly close, often ‘high sticking’ with no fly line on the water.

All of this is made easier if you are close to the fish. I wade very carefully and often need to stand still for more than ten minutes to allow fish to start feeding again, once I’m in position. If you have company, then don’t fish in the same pool or run as the increased disturbance is more likely to alert the trout to your presence. It will seem as though rising fish are constantly out of range as those closest to you will not be feeding.

With sipping rise forms it can be difficult to judge the size of the feeding fish and so harder to target larger trout. I know of one trophy hunter who claims to avoid fishing spinner falls for this reason!

As the river is usually low in the hot summer, it is important to play fish hard so as not to exhaust them in the warm water. The reel drag needs to be set appropriately to cope with long runs in the shallow water and, if the temperature is over 20°C I will move to a cooler, tree-lined stretch further upstream…or light the barbeque.

Catching large wild trout during a spinner fall is one of the best things in fly fishing. I can recall evenings from years ago where tens of two pounders were rising and I trudged home, broken, having caught only a few small fish. Those experiences spurred me on to solve the riddle. It became an obsession where the next evening couldn’t come quickly enough and resulted in hours spent pursuing trout in the twilight.

While I have not completely cracked the code, I’m always learning, but those deeply frustrating evenings are behind me. Time spent away from cold beer and warm wives has paid off.