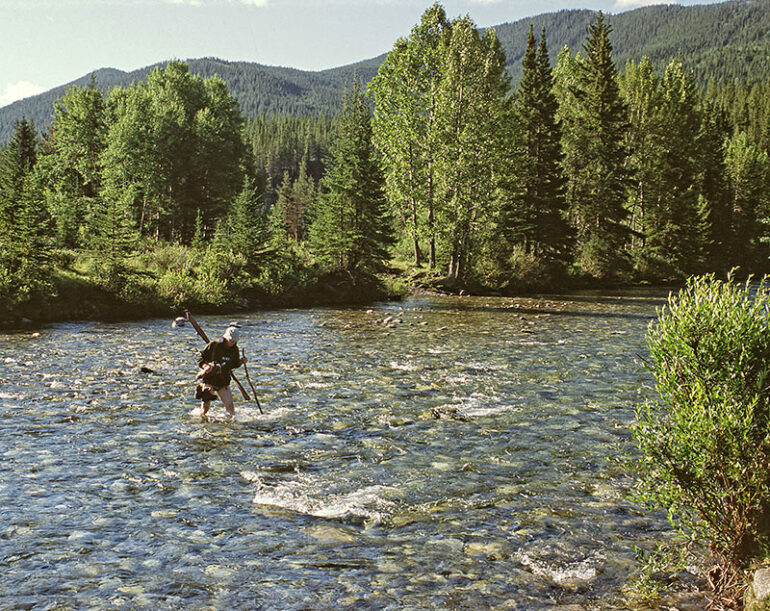 We knew it would be quite a challenge to reach the lake, catch a few trout and get back before nightfall.

“Lake of the horns” is so-called because of the types of fossil found in the limestone surrounding the alpine cirque in which this beautiful lake is situated.

The guide said it was located12kms from the highway and would take 6hrs to get there but did not make much of the facts we would have to ford the Highwood River and scramble a headwall several hundred feet high.

Chris and I decided we needed to start at first light to get on the trail as soon as possible. After driving from our campsite at Cataract creek we parked by the side the Highwood pass road, which only a few miles upstream crosses the highest road pass in Canada and is closed through the winter months due to snow.

The first mile or so was easy going through an open meadow until we met our first barrier in the Highwood River itself. The Highwood is a pristine mountain river with fabulous fishing but today it was just a hindrance to our progress. 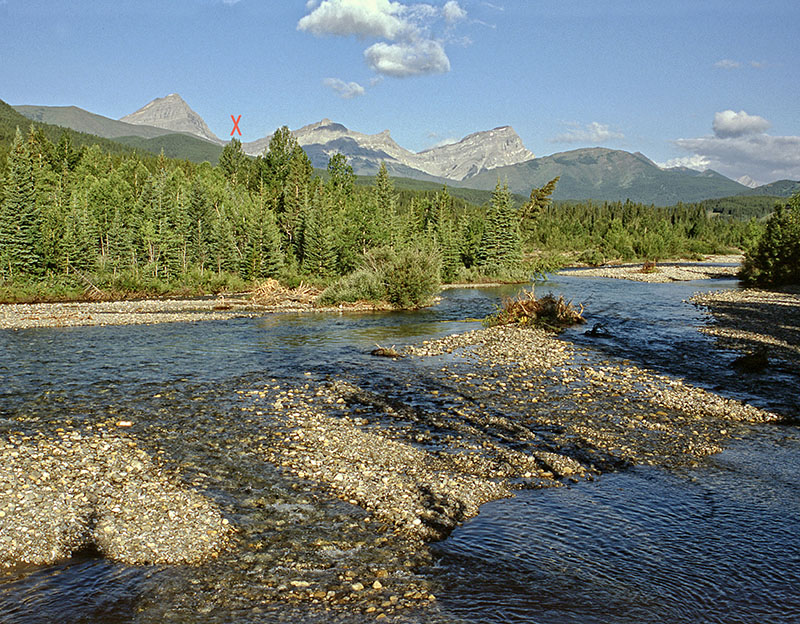 Across the river, in the distance, we could clearly see Mt. McPhail and the cwm in which nestled our destination.

There are no bridges so the only thing to do can be seen in the photo as Chris takes his turn to wade the freezing water. 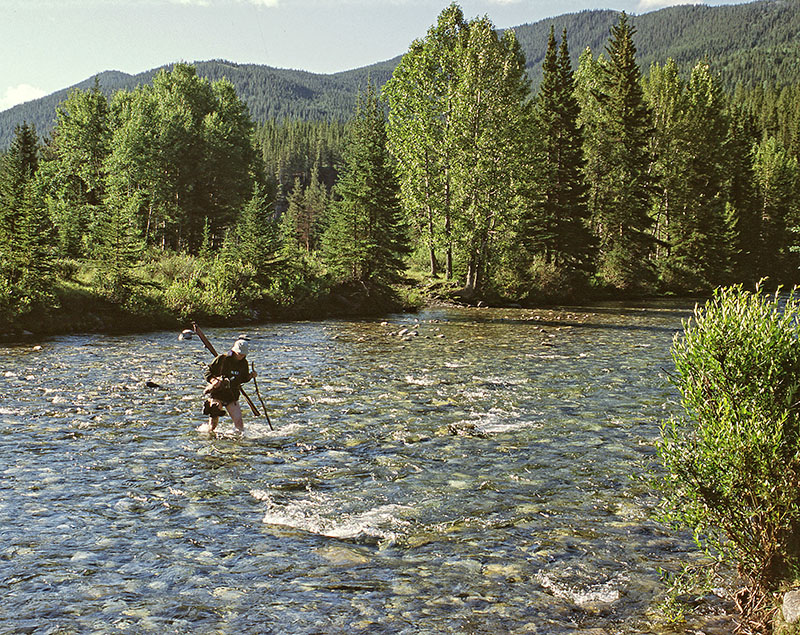 After drying off we began the long trek along an old logging trail towards Mt. McPhail. Eventually, we began to get a better view of what was in front of us, though our destination remained a long way off. The location of the lake is marked on the photo with an X. 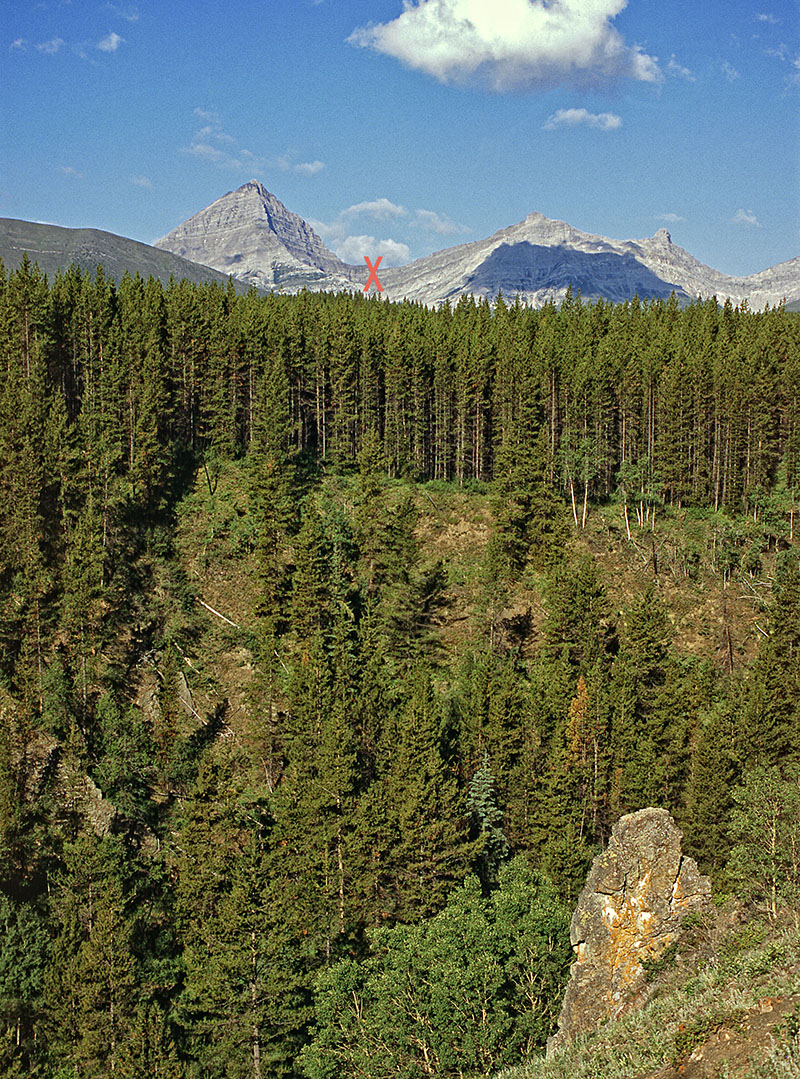 A few hours later we had made good progress and Mt McPhail began to tower above us. 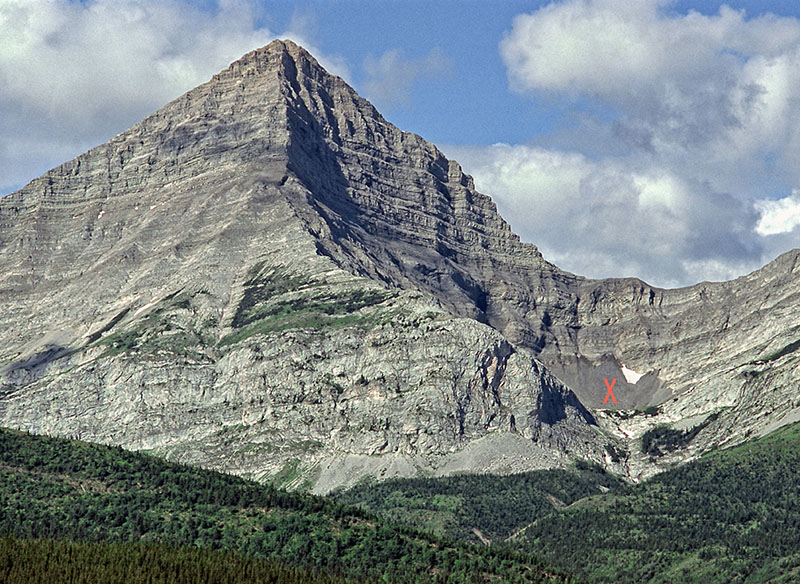 I did not look too difficult from here but as we got even closer the enormous headwall holding the lake began to appear. We had been on the trail some 4 hrs, and it would be another 2 before we reached the lakeshore. 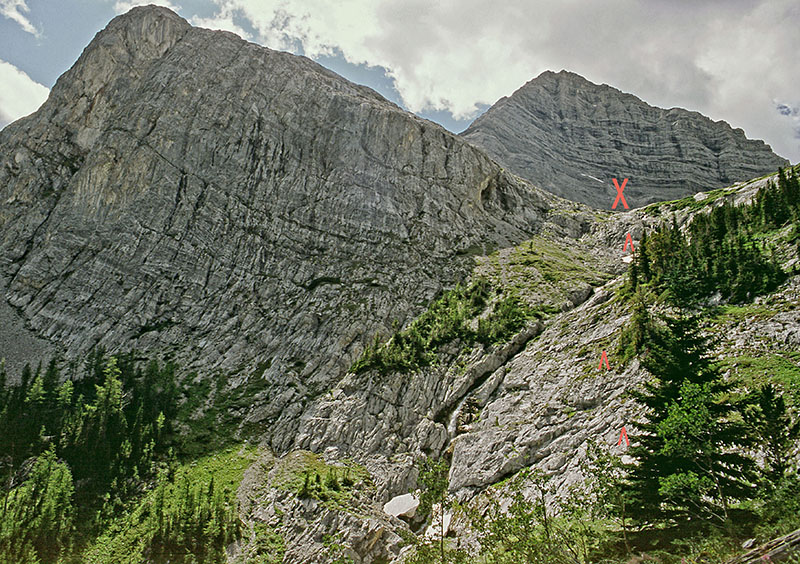 The next problem was to find a way up the headwall without having to rock climb. The lake is at the top of the headwall below the right-hand peak. 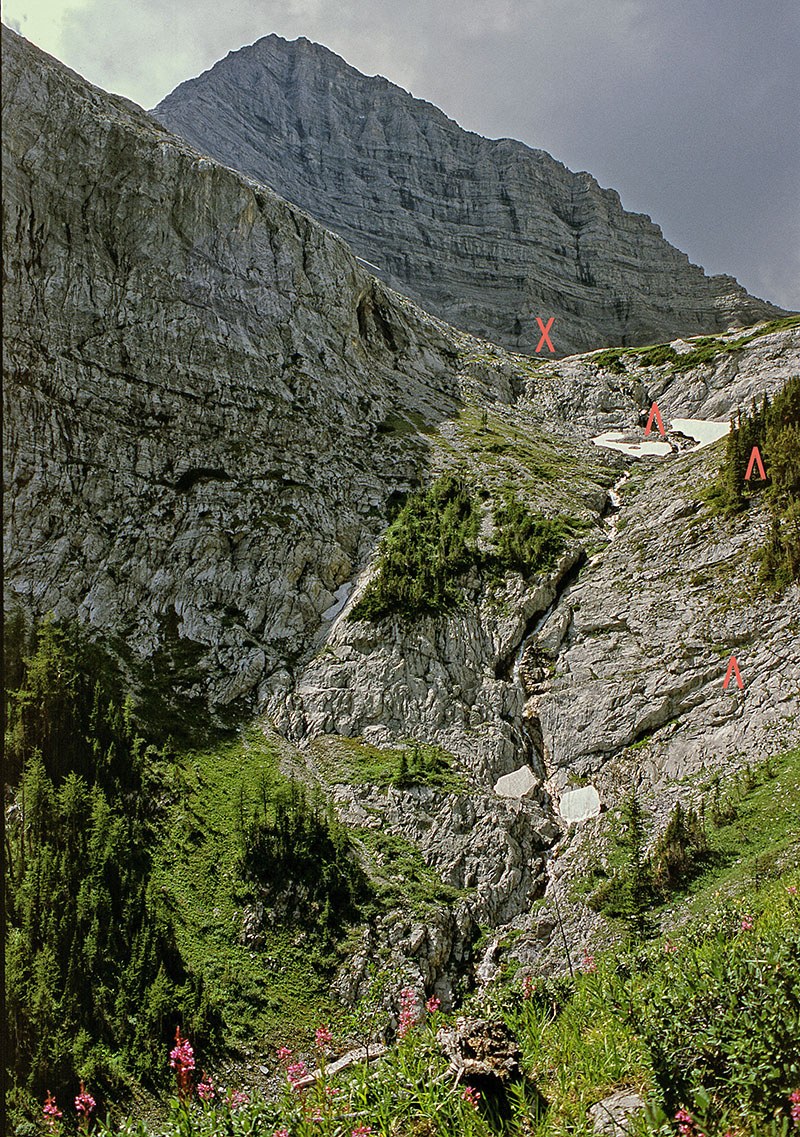 We decided to scramble our way up the slabs on the right-hand side of the outlet and try to get into the large trees on the extreme right of the picture. We could then cross the snow patches to the top. 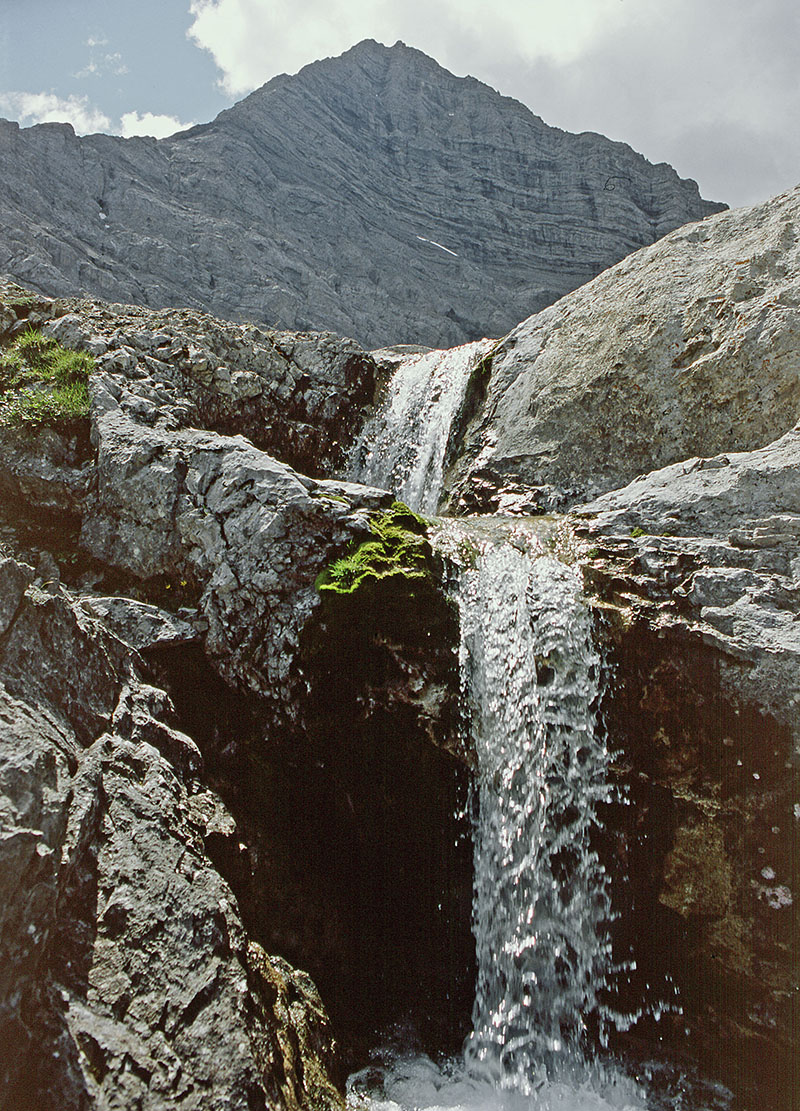 Thankfully, everything went to plan and once past the final couple of waterfalls, the lake appeared in front of us. What a sight to behold. 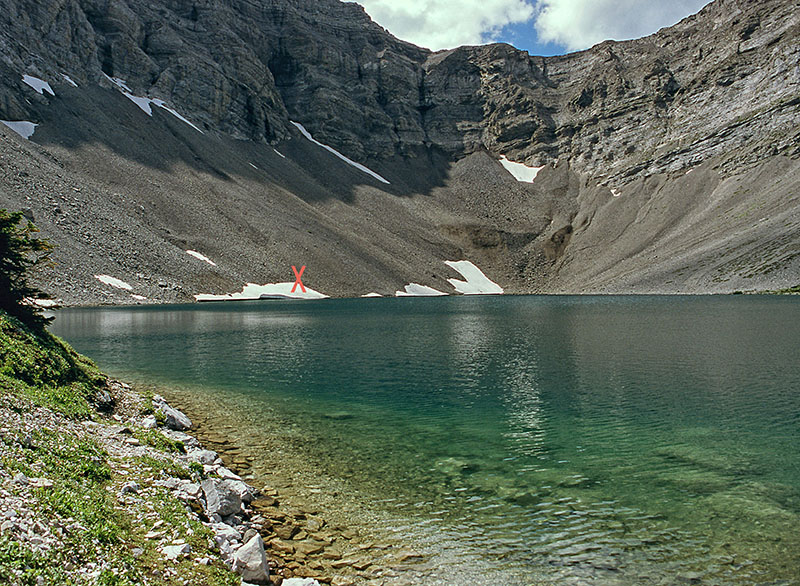 It had taken us the full 6 hours, so if we were going to catch fish, then there was little time to soak up the scenery. The deepest part the lake with a very sharp drop off was beneath the snow patches seen across the lake. I made my way around the shore and by the time I reached the first large snow patch spotted Cutthroat trout cruising a few feet down in the crystal clear water of the lake margins. I assumed they were looking for terrestrial insects blown onto the water’s surface. Onto the cast went a size 14 “Humpy” dry to be placed a yard or so in front of the cruising fish. Almost everyone I cast too leisurely came to the fly, and in an hour or so about 20 fish were landed of which 2 were kept for our supper that evening. 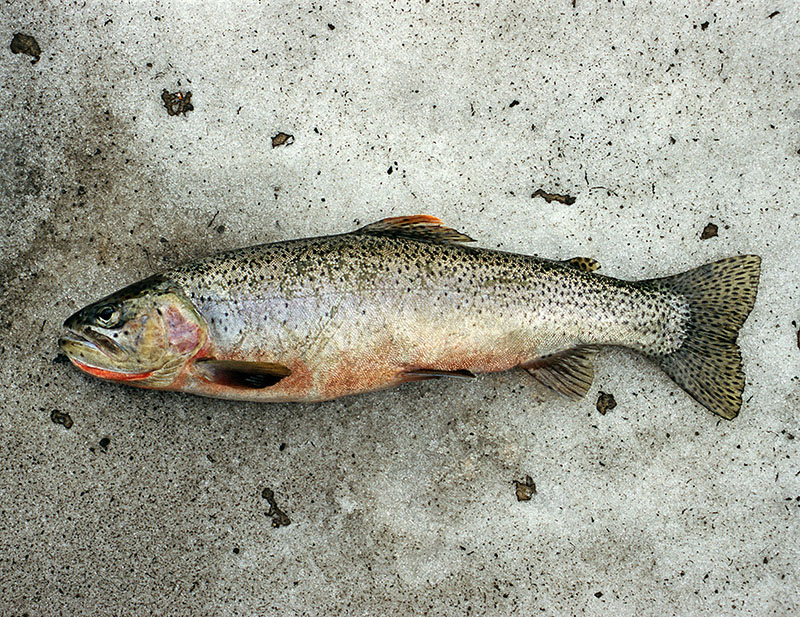 Lake of the Horns like a few other lakes in this area is stocked by helicopter every 2 years. There is a strict 2 fish limit. We found a post near the outlet with a box welded on top made for catch returns. Checking the previous returns, the last person had visited a few months previously.

It would have been a great place to camp for a day or so, but we were unfortunately not equipped for such an enterprise and after only an hour or so at this magical location we reluctantly headed back. 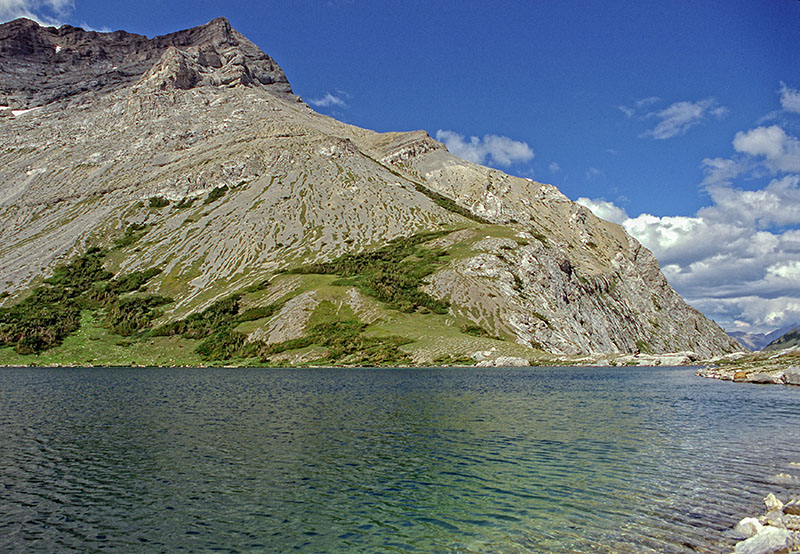 As we left, I photographed the thin block of rock only a few metres thick which incredibly holds the whole lake into its alpine bowl. 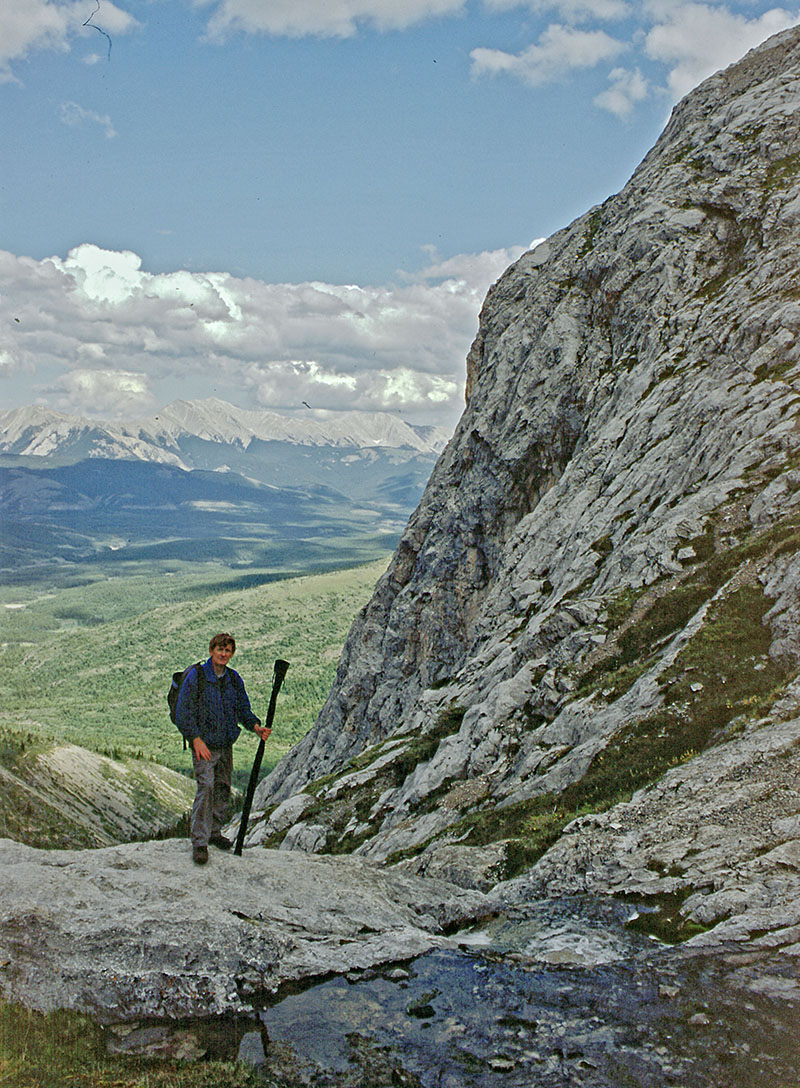 From this natural dam, you can see the distant mountains beneath which our car laid waiting. 5 hours and another wade of the Highwood River we made it just before dark.

Notes from the Editor: Alan Parfitt is the Society’s Treasurer and a long-standing member of the club. Those that know him will recognise his great enthusiasm for wild places and his great skill with a camera is obvious. Alan sells many of his photographs and, if interested, visit Alan Parfitt Photography on Facebook.