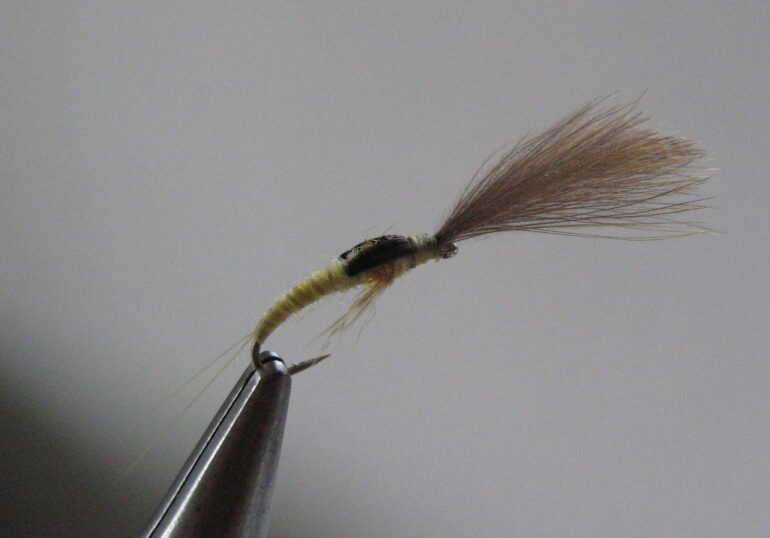 It was back in May 2005 when, having moved to West Herefordshire, I first encountered large numbers of Yellow Mays (Heptagenia sulphurea) on the middle Wye. Until then, I had only seen the occasional Yellow May on the Ebble in Wiltshire, where they are such a minor fly as to be of no interest whatsoever to the local fish and certainly not worthy of imitation.  On that May day in 2005, fish were rising and Yellow Mays were hatching, most appearing to take to the wing immediately whilst the duns sailed on unmolested for a while before taking off. Much like the natural duns, a sulphur dun artificial was also ignored, but I did manage to catch a couple of fish on other small emerger patterns. Frustrated by my failure but with my curiosity aroused, I decided to find out what tale the last trout stomach told. Apart from a few small olive nymphs, the stomach contained nothing else but what, ongoing home and reading Oliver Edwards “Flytyers Masterclass”, I then recognised as large numbers of Yellow May emergers, some with wing buds much like those of the nymph and others with more inflated wings. 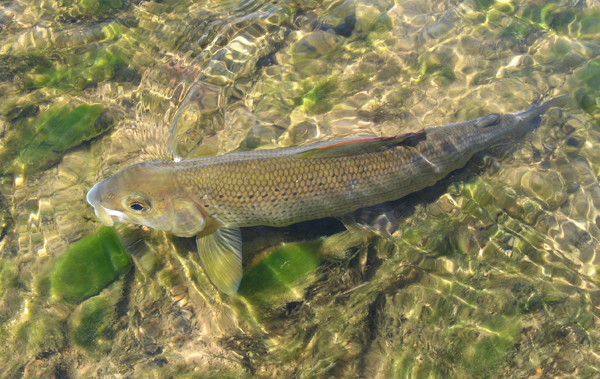 No wonder the fish weren’t interested in my offerings, because I had nothing in my fly box that looked anything like these strikingly beautiful insects. Although there was a pattern for a Yellow May emerger (YME) in Oliver’s book, I wanted to make something based on what I had found in my trout and which would fish in the surface-feeding zone, and so I decided to make a shuttlecock emerger with black wing buds and an orange thorax. Although the original was tied with natural CDC, a yellow CDC wing can at times be more visible than natural grey. 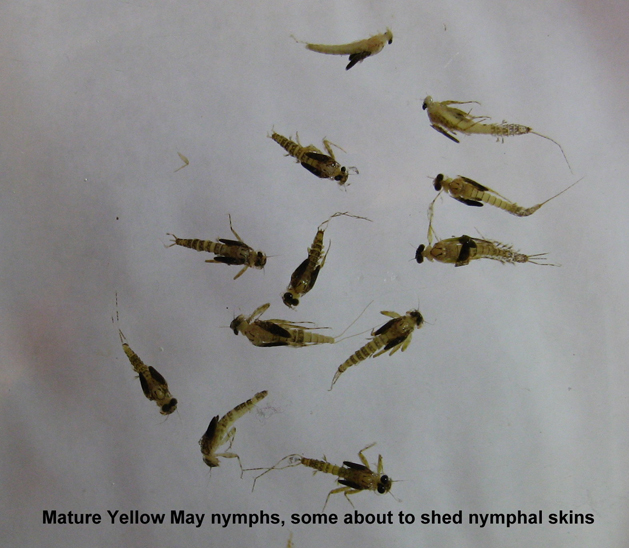 A couple of days later, I headed back to the same stretch of my local water where I was pleased to see that fish were still rising to something at the surface, now presumed to be the emerger, where again the duns were essentially being ignored, and fished there and on a few other parts of the river whilst the Yellow May hatch continued.  Over the next few days, the shuttlecock was a real success. Several trout that I didn’t even know were there were raised by it, including one enthusiastic fish of nearly sixteen inches that displaced a fair bit of shallower water as it hurriedly moved across to take it. A few more trout, a couple of grayling and two chub of around three pounds followed. 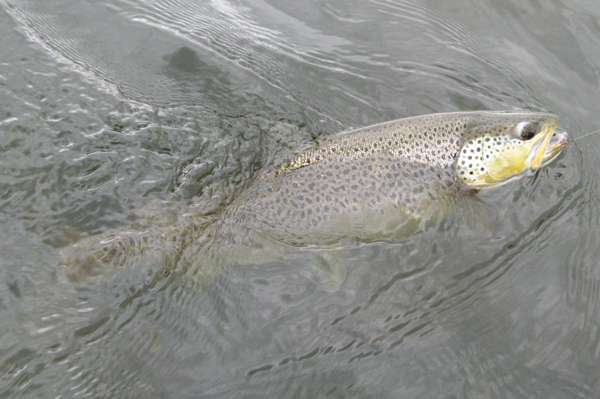 Frustration over and success at last! Over the coming weeks and months, trout consistently took this pattern at various locations further afield on the upper Wye and the Usk, as did grayling and chub on the Wye and, with a few minor modifications, I have used it ever since. My fishing buddy even caught a magnificent, very actively feeding Wye trout of over three pounds with one in 2009 – no comment!!! Anglers understanding of the emergence behaviour of the Yellow May has improved since 2005 and a superb article in Fly Fishing and Fly Tying in 2009 based upon observations by Oliver Edwards and Stuart Crofts provides an excellent summary.  It is known that Heptaginea sulphurea nymphs behave rather atypically in that they not only shed the nymphal shuck as the dun emerges at the surface (in common with other up-winged insects), but also shed the nymphal shuck whilst still attached to rocks and stones, before swimming, as a true emerger, up to the surface. On the way to the surface, this emerger, neither nymph nor dun, can also begin to inflate its wings; stomach contents reflect this, containing emergers with small as well as with partially expanded wings.  Another Heptaginid, H. lateralis, is also known to behave in this way. 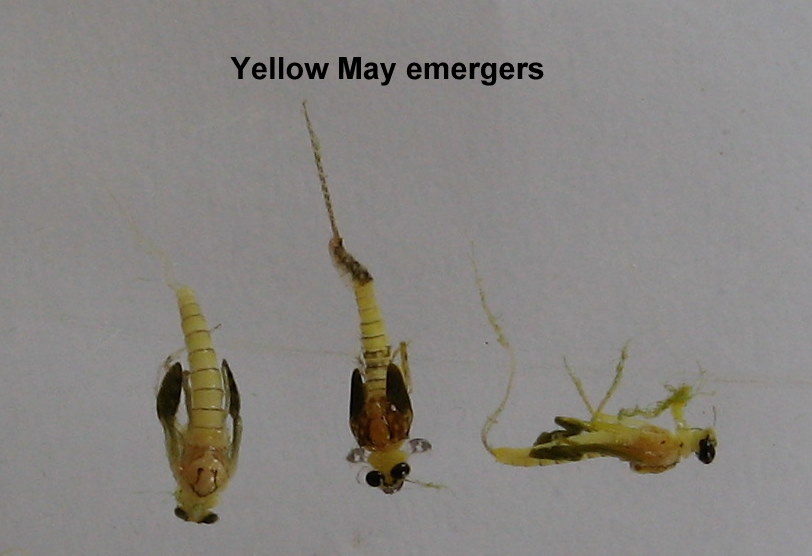 Back in 2005, I had made a shuttlecock rather than a parachute emerger because I wanted to make something where the black wing buds would really stand out. I had visualised it as one of those naked true emergers, which had got its kit off down on the bottom and, having swum towards the surface, was almost ready to enter the surface film and emerge. I hoped that the contrast between the yellow body and the striking black wing buds and orange/amber thorax might prove to be a powerful trigger. I have also made a shuttlecock with different wings, attempting to mimic an emerger whose wings are partially inflated – it works too, but I usually just stick with the original version! Since 2005, these shuttlecock patterns have proved highly successful, luring many fine trout, grayling and chub on the Wye and Usk.

Fish frequently create big bow-waves when attacking the emerger from distance, just as when they are aggressively feeding on the naturals, whilst others have offered barely-perceptible sips when partaking of more leisurely meals! On the Wye and the Usk, although some Yellow Mays will hatch much later in the season (even into September and October), May and June and, to a lesser degree, July appear to me to be the prime months of emergence – however, in the remarkably hot April of 2007, Yellow Mays even appeared on the Wye in the last week of April! On some days when Yellow Mays appears to be almost all that is hatching, and even if only in relatively small numbers, the shuttlecock emerger has proved effective both in taking rising fish and in raising non-rising ones as well. 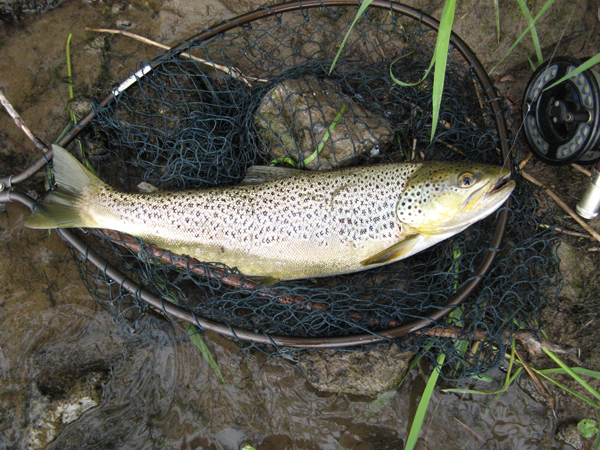 On other days, particularly as May and June advance and the wider range of insects such as smaller olives and Pale Wateries appear, heralding the arrival of summer, and maybe with the peak of the Yellow May hatch over and more of other things on the menu, fish appear to be less inclined to take Yellow May patterns as willingly as they did earlier. Faced with such multiple hatches and this smorgasbord of early summer fare, I assume that they simply become more preoccupied with the more abundant smaller flies, nymphs and spinners. Delighted to fish for the first time at Ty Mawr this year, and having been told by Mark to anticipate good sport at Yellow May time, his advice proved spot on. Come to the end of May, Yellow Mays were on the menu again and the YME proved effective once more. A visit in early June saw fish taken early in the morning on mini-caddis pupa emergers but later on, nine trout were taken on the YME – several of 1.5 to 1.75lbs and one of 2lbs – a lovely fish, sipping away in just inches of water. Absolutely delightful! I also keep various other Yellow May patterns in my box just in case I might need them, but the first one which I tend to use during the YM hatch, and from which I don’t often need to stray, is a YME shuttlecock. So, as you can see, Yellow May emergers do provide Food for thought and food for fish.

For those who do not tie their own flies, the YM shuttlecock emerger is in the 2012 Fulling Mill catalogue and are on sale via Hartley Fly under Fulling Mill New Range 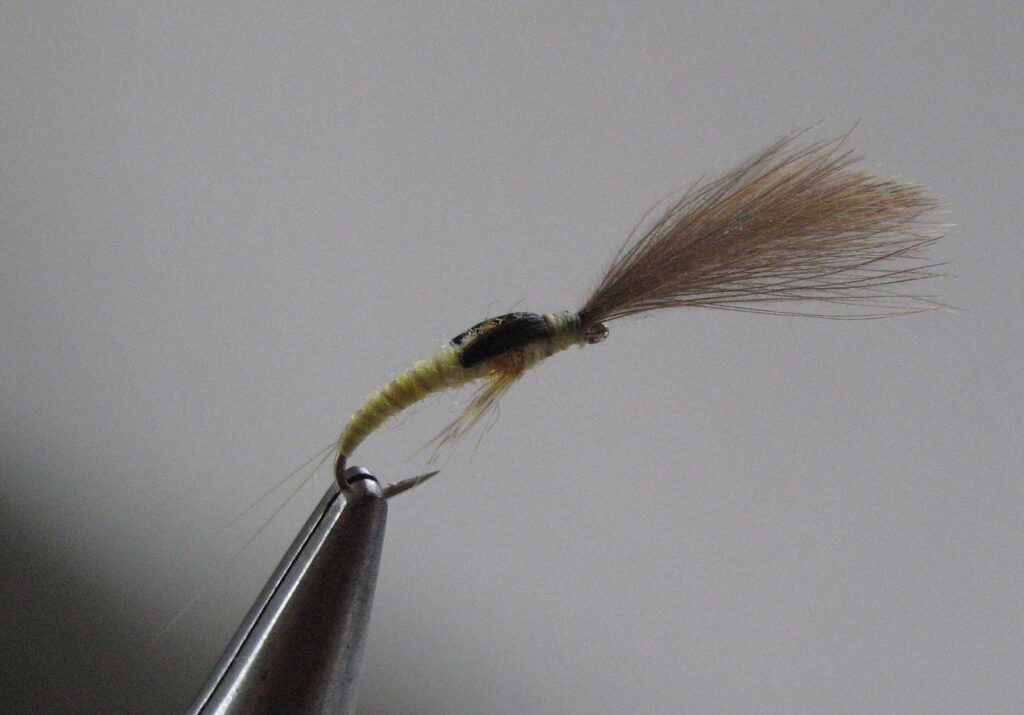