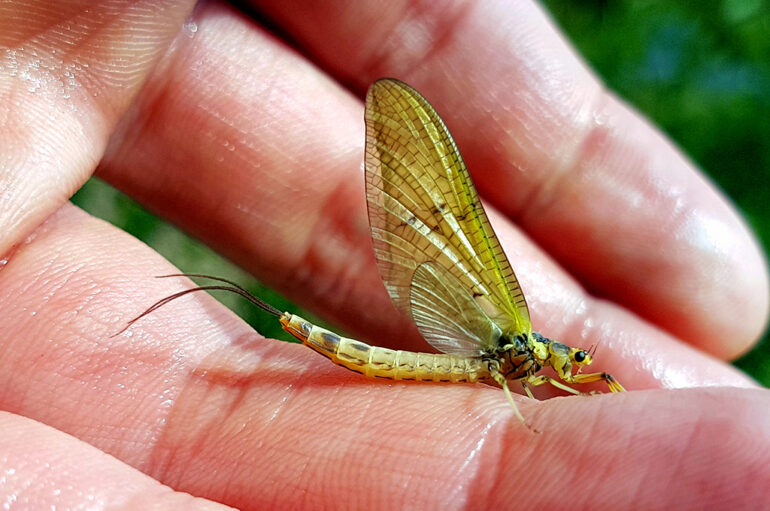 Key Invertebrate Species for the Usk and Wye Catchments

An article by Dave Collins.

The list below is not intended to be comprehensive, and comments made are deliberately brief and for guidance only. Emergence patterns are generalised, can change according to seasonal weather conditions and can be earlier, later or more prolonged. What are considered to be peaks in fly emergence, are noted below. For more detailed information read Trout Fly Recognition by John Goddard; Matching the Hatch by Pat O’Reilly; A Pictorial Guide to British Ephemeroptera by Craig MacAdam and Cyril Bennett; and Field Studies Council (FSC) guides on Sedges, Stoneflies and Caddis larvae. Baetis, Centroptilum and Procleon spp. nymphs are agile darters. Rhithrogena, Heptagenia and Ecdyonurus spp nymphs are stone-clingers.

Somewhere on our rivers throughout the year and significant during summer months.

Big fish can sip on these small (3-5mm) but abundant items of food.

Large Dark Olives emerge throughout the winter, even on the coldest days, then into spring and again from late-summer through autumn. In the winter and early spring, look out for these either side of mid-day into the early afternoon.

The first sedge of the year, appearing during April and whose emergence is triggered by sunshine. Don’t confuse blizzards of Grannom seen drifting upstream with a hatch, as these are generally pregnant females, which emerged a day or two earlier, returning to lay eggs.

Fish feed on Grannom cripples, spent adults, pupae and emergers, from which you will see adults popping out of the surface film accompanied by rising fish.

Black Gnats usually begin to appear in numbers from May onwards and provide staple food throughout the spring and summer. Not just Bibio species, as the Usk has Hilara maura as well!

An unmistakable, beautiful, sulphur-yellow up-wing with an orange thorax, usually seen from early May onwards. Often seen from mid-morning but can emerge earlier in the day. A trickle-hatching species that can still be seen until early October. It is often said that “fish don’t like YMDs” but this is simply not true.

Duns may often be seen passing unmolested whilst fish rise to something unseen – these fish are feeding on YM emergers.

Unlike most Ephemeroptera, Yellow Mays are almost, but not quite, unique in that they can shed the nymphal shuck sub-surface before rising to the surface as true emergers (YMEs), rather than classic Ephemeroptera spp. nymphs which undergo eclosion at the surface.

Usually seen from May onwards, and from then well into the summer and early autumn. An up-wing, somewhat larger than the March Brown, but often and unnecessarily confused with it, if hatches overlap. Both have heavily veined wings but only the March Brown has dark oval marks on each femur, and only the LBD has yellow pigmentation on the leading edges of its wings. Like YMDs, LBDs tend to trickle hatch and may often be seen drifting along river margins as well as in more open water.

A major species, generally seen from May and into June but can be earlier. Like YMDs, a medium to large-sized fly, but with an olive body, clear upright wings and unmistakable dark oval patches (like March Browns) on the femurs. Often seen in and downstream of riffles, from where they hatch. Fish love them!

This fly has a reputation for emerging on cool or rainy days in late spring or early summer, when you may be foxed by trying to represent other more obvious or more likely flies; then you may find these little inky dark flies stuck in the film.   It is certainly worth having an imitation on hand.

Green Drake mayflies are the iconic species of southern chalk streams but are being seen increasingly on our rivers, possibly as a result of greater siltation. They are a species regularly seen, especially during May and June, but later as well, on the Monnow and its tributaries, on the Lugg and Arrow, and on the Llynfi in Powys.

Worth looking out for anywhere, especially in the margins where you may find that you are walking on their “housing estates”! Agapetus ochiripes, as identified for Gwent AS by Stuart Crofts, is the species found on the Usk around Abergavenny. Their homes are those millions of small, gravel-encrusted dwellings on the edges of almost every marginal rock in the river.

Inside each is a small ~5mm larva which, after pupation, becomes a mobile, pharate adult which swims to the bank, or onto an above-surface prominence (including your boots and waders!), where it becomes a small, grey-winged sedge. Fish, and often the bigger ones, will be found sipping in the margins, early morning and late evening in May, June and into July, on “in-transit” pharate adults.

As late-spring merges into summer, smaller olives (Baetis spp), pale wateries (Baetis fuscatus), and spur-wings (small: Centroptilum luteolum and large: Procleon pennulatum) predominate as the large hatches of the bigger upwings diminish, though these smaller upwings will have already been around for a month or so. Pale wateries are a major food item throughout the summer and into the autumn when grayling love them!

As nymphs, these are classified as Moss Creepers. They live on mossy stones and are not agile darters, but laboured swimmers with a distinctive, slow, rocking style of movement. They metamorphose into a small to medium-sized fly which can be easily distinguished from Baetis spp. by having three and not two tails. Emergence can be during daylight hours but is more characteristically associated with evening and dusk. As with all Ephemeroptera up-wing species, spent spinners of all sizes make easy prey, and those of the BWO is the classic Sherry Spinner when, as the light goes, targeting rises becomes more a test of hearing than of sight!

Whilst the Grannom constitutes one of the earliest food items of the year, there are many other species of sedges/caddis which, as cased or caseless caddis larvae, are on the menu all year round. After pupation and emergence, skittering sedges with their roof-shaped wings, along with spent spinners, become a classic item on the piscatorial menu in summer evenings.

These are species of well-oxygenated and so faster-flowing, more rocky waters which live their sub-surface lives as frequently-moulting nymphs, which are primarily nocturnal. At maturity, after the final moult and with developing wings, they crawl out of the water onto rocks etc. to subsequently emerge as an adult stonefly. These are not particularly strong flyers and the females return to the water, dipping to lay their eggs. Commonly seen species are willow fly, needle flies and yellow sallies.

Abundant shrimp populations are a sign of a healthy river, offering sub-surface food all year round. They are often greyish-green and sometimes have a small, red parasitic spot in the middle.   Like caddis larvae, they tended to be the key families for which weighted patterns were developed and upon which Czech nymphing was founded.

Wind-blown or dropping from trees, terrestrials contribute to fish-food on the river and become more significant as the season progresses, as insects of all species proliferate e.g. hawthorns in April and May, bees, wasps, flies, daddy long legs, moths, butterflies and associated caterpillars, aphids, grasshoppers, beetles of all shapes and sizes, and of course ants! For rivers, it is worth having representations of at least some of these species especially hawthorns, beetles, caterpillars and ants. If you are lucky enough to be on a river on that day each year, often around mid-July when, miraculously and simultaneously, all of the ants in South Wales take to the wing (how does this happen?!), you will rue not having any ant patterns to hand, because every fish in the river will be sipping ants, spent with open wings but, the moment that ant-fall stops, so fish stop rising as well!

Other upwings may be encountered during the summer but often not in large numbers. These are Turkey Browns (Paraleptophlebia submarginata) which are a medium-sized fly with dark mottled wings, dark bodies and, distinctively, three tails;

The Yellow Mayfly (Potamanthus luteus) is another three-tailed but rare species found only on the Usk and Wye and nowhere else in the UK.

A small net to scoop bugs off the surface, available from all aquarium shops, can be invaluable, and routine inspection of bank-side vegetation and cobwebs can usually be very instructive. Tight lines and happy bug hunting!

This review was prepared by Gwent Angling Society for its 2018 Open Day, providing information for fishing the club’s waters on the Usk, Wye, Sirhowy, and the Llynfi in Powys, as well as when venturing further afield in the Wye and Usk catchments. The club’s website (www.gwentanglingsociety.co.uk) holds much more information on insects and artificial patterns to “Match the Hatch”. Photographs by Gwent Angling Society members, Lee Evans and Dave Collins, and the late, Dr Michael Wade. Thanks should be accredited to the Wade family for allowing us to use their father’s photographs.

WHY NOT JOIN US?

The Gwent Angling Society is a progressive, conservation-minded club offering fishing on six beats on the River Usk, two on the River Wye, the Sirhowy river and Afon Llynfi (Powys), and the wonderful Talybont Reservoir. Our waters can be viewed here. If you are interested in joining us or have any queries, simply contact our Membership Secretary.