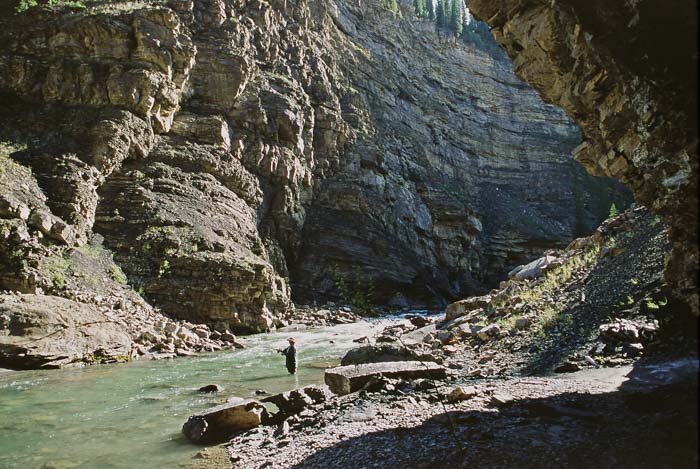 I don’t know what stimulus reminded me about this fishing episode the other day but I thought to share an unusual fishing experience from several years ago.

My very good friend Dai Parker (now sadly no longer with us) and I were on one of our biennial trips to fish in the Canadian Rocky Mountains. We decide to fish the Bighorn River for Cutthroat trout. The attraction of this particular river is the spectacular gorge it has created with tumbling rapids and deep blue/green pools.

The plan was to work upstream probing deep into the canyon until the wonderful Crescent falls were reached barring any further upstream progress.

When you buy your fishing permit in Alberta you are giving a booklet the volume of a fishing magazine, which includes all the various regulations for each river in the province. After consulting the rulebook we found that there was a 12-inch limit for taking fish on the Bighorn. No problem we thought and a few grilled trout for supper at our campsite above the falls would be good.

We set off confidently. To those who know me, it will come as no surprise to learn I had soon left Dai way behind as we worked our way upstream. What was to be seen around the next corner was as big an incentive to me as any promising pool or “Hole” as they call them in Canada. I fished my usual dry fly, probably an unsinkable “Humpy” pattern. Nothing much was happening and when I considered changing to a nymph in the corner of my eye I spotted a quick rise in the fast water of a pool. It being early afternoon, experience told me a hatch of Western Green Drakes had started. These flies never hatch in large numbers but when they do the fish really switch on to them and providing you have a suitable imitation you can do really well.

Sure enough, on changing fly I soon landed a nice Cutthroat trout, which appeared to be around the 1lb. mark. “That is one for supper,” I thought but decided to check with the measuring tape I had been loaned by my friend Alan Jones back in Edmonton. Unfortunately, I was quite surprised when the scale read only about 11 inches so back it went. This was repeated on several occasions and by the time I had reached the Crescent falls had failed to secure a fish for supper. I made the long hike back downstream and eventually met up again with Dai hoping he had been more successful.

Thankfully, he had killed a couple of fish so we were sure to eat well that evening. However, on inspecting his fish they were more or less the same size as those I had released. I tried to politely point out to Dai that he had killed fish illegally but he assured me they were above the legal limit and even brought out his tape measure to prove it. Indeed he was correct.

Very puzzled we compared tapes only to find an inch on my tape was slightly longer than on his. What was going on?

On returning to Edmonton a few days later we discovered the answer. Alan had spent some time in China helping to train their budding Biochemists and had returned with the tape he subsequently loaned me. Did you know of the Chinese Inch? Well it exists and is called the “Cun” The imperial inch is 2.54 cm. but the Chinese 3.33 cm. There were some very grateful Trout in the Bighorn River for the existence of the Chinese inch.