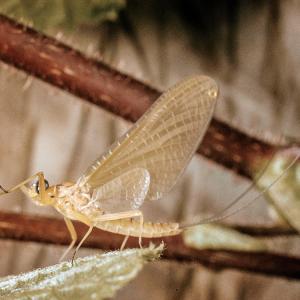 There was a time where I wouldn’t have thought of using a pattern to imitate this fly. However how times have changed.

This fly has become very important to the fish of the River Usk particularly since the lack of March Browns during the past few years.

The fly is unmistakable with its bright yellow sulphur colour and the majestic way it sits upon the water.

It is as an emerging pattern however which can catch you a lot of fish. The Nymph is a stone clinger but has the unusual habit of when emerging it sheds its nymphal case under the water, and swims to the surface ready to burst out of the water and fly away.

As it is in the film of the surface of the water it will pump blood into the wing and almost instantaneously it is on the surface and gone.

The main hatches occur in May but they will continue to hatch through to August /September.

When the flies are on the water the thorax almost looks like it is sunburst yellow and can be copied easily.

The male spinners tend to be darker than the female.