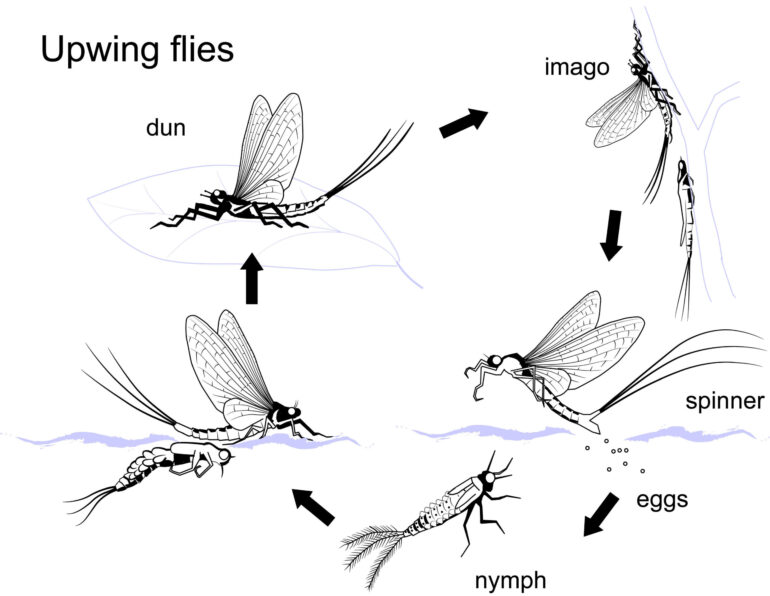 How to Choose the Correct Fly – Part 1 – Upwings (Ephemeroptera)

One of the many decisions we have to make when we go fishing is what fly to put on. I know that this seems an obvious thing to say but I am often surprised what people actually fish with on the end of their leader.  I will try and explain some of the thought processes that I go through to help me make a decision for trout fishing a river no matter what time of year we are there.  The first thing is to learn about entomology which is simply the study of insects and as these are the items trout feed upon it will help you make the right choice.

There are four main groups of flies that trout and grayling concentrate upon. The first is what traditionally we think of what trout eat and these are termed Up winged flies or EPHEMEROPTERA. There are a number of specific stages that these insects go through. Many are a focus for trout and when you become aware of when they are at these specific stages it will enable you to choose the right pattern.  In the diagram below you will see the different stages that the fly develops through its life cycle.

We can fish patterns that relate to the different stages that the trout feed upon the insects and these main patterns include weighted nymphs which are fished deep in the water if not near the bottom of the river, unweighted nymphs which can be fished when the nymphs move from the deeper depths to the mid-levels of the stream further towards the surface in anticipation of hatching as a dun.

There are then patterns that can represent the emerging dun and are fished in the water surface and are often part nymph and part dry fly.

We can then fish either dun or true dry flies or even variations of these that imitate those flies that have died or are near to death following the failure to emerge completely from the nymphal shuck or have done so but have been trapped within or on the meniscus film. (That layer of water that meets the air and on which insects float on)

Once hatched and the fly has left the water many species will then metamorphosis or change,  (for interest this transitional change is known as an instar) again to become sexually mature (Imago) where they will be seen dancing in clouds above the banks. Once male and female have mated the females return to the water to deposit the next generations of eggs and often die through exhaustion. This is often referred to as a fall of spinners and can result in fantastic sport for often-larger fish. These falls occur when the light is faded either at the end or beginning of the day.

With just one category of fly, we can now have several patterns to choose from and this is often dictated by observation by you the angler for you need to know what the fish are feeding upon or at least be able to make an educated guess.  This is done by a simple kick sample of a few seconds and by watching the water to see how the fish are rising or feeding. It will also be dictated by your preferred method of fishing. This is the same process of elimination for most rivers and all that is needed now are to get to know what flies can be expected to be seen on the water you are fishing at any particular time of the year. Remember you do not need an exact copy of the living insect but you will want a fly that will match those trigger points that the fish are searching for. A general rule that I use is to first get the size and silhouette right. These are probably the two most important factors and then you can think about colour. A good thing to remember is that when an invertebrate is in its nymphal state then they tend to be opaque as they merge with the riverbed. As they start to emerge they become brighter as gases expand the outer shell to allow the release of the dun inside. The duns and spinners, in particular, are generally translucent and allow light to pass through their bodies.

The trout or grayling chooses a fly to eat because it recognizes it as food. The way it does this is it looks for the right triggers so that it can respond. This often answers the question when a large hatch of fly is taking place why the trout prefer to eat something else often a lot smaller. I believe it is simply because the fish hasn’t as yet switch onto the larger hatch as available food.  Many of the triggers that get a response from the trout are related to where it expects to find its food at a given time. A number of anglers think that trout are only feeding when they see them rise on the surface. The truth is that they will feed all day until they almost burst if the food is available provided they are switched on to that food source.  Now before you choose your fly you have to know what the trout are likely to be feeding upon and where they are looking for that source of food. This is often dictated by the water and air temperature and time of year as well as to the type of water you are fishing. Many of these questions can be easily by completing a simple 10-second kick sample to see what invertebrates are available. To explain all you have to do is get a bit of fine netting and get it to the shape of your landing net and ensure that it fits tightly over the rim. Now put it into the water and hold the handle upright with the rim on the gravel/stones and gently kick your feet disturbing the bottom. The rubbish will settle again to the bottom of the river but the fine netting will collect the nymphs and aquatic life that the trout feast upon.  You will see that the majority of food that the fish eat is a lot smaller than the flies and the colours are a lot darker than you expect.

If you are not sure what type of nymphs or flies you have collected then just take some of the flies you have in your fly box and lay them in the water beside the insects and pick the one that looks similar in size and shape to the majority of the nymphs in the sample.  What you will find is that you will soon have a collection of half a dozen nymphs, half a dozen emerger and half a dozen dry patterns that will fulfil your every need for the season.  To develop a better knowledge and understanding at what you are finding in your waters then I can recommend some of the Field Studies Council (FSC) AIDGAP publications which are designed for such a purpose as this and do not fall apart when wet!!! The publications available can be seen at www.field-studies-council.org or contact them by email at publications@field-studies-council.org

In the next part, I will explain about the other important types of insect other than the upwings that can catch your fair share of fish.