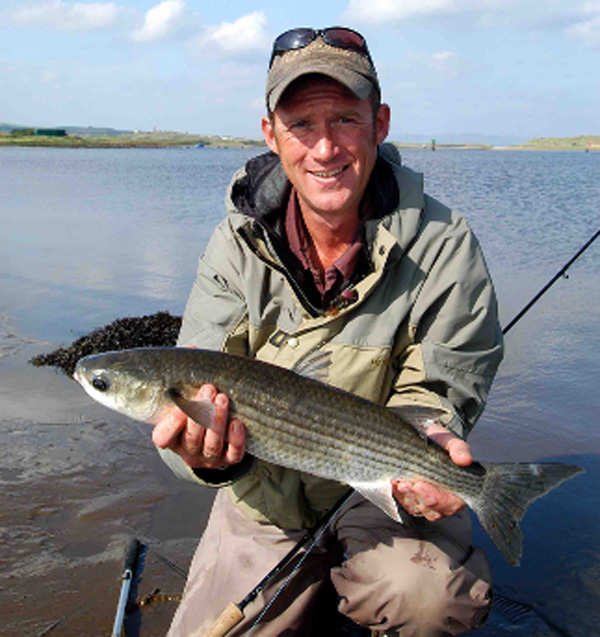 Fly Fishing for Mullet in Northern Ireland, by Leslie Holmes

An article by Leslie Holmes APGAI.

Mullet!! Ahh, the frustration I hear you say, and on the fly impossible! Bread flake and maggot patterns it has to be; definitely not! I live on the North Coast of Northern Ireland where the River Bann (renowned for its Salmon beats such as Carnroe & Movanagher ) flows to the sea at Castlerock. In this estuary, there are fair numbers of sea trout which I’ve spent many a year fishing for contently. A number of years ago I noticed very large shoals of Mullet cruising the margins in the estuary as the tide filled, which I tended to ignore other than having the occasional throw with my sea trout patterns to no avail.

Then on a number of days, I made a point of walking the estuary as the tide filled, with no rod, solely to observe these shoals of Mullet as they had begun to intrigue me. I noticed that there was always a number of fish in front or to the rear of the main shoal. As the front runners moved up the shoreline in approximately 6 to 8 inches of water and it became obvious that there was a sprinkling effect on the surface, seconds before an eruption of fish broke through the top of the water. This was one of those chance discoveries as conditions were extremely hot with not even a whisper of a breeze on the estuary. I then returned home and put the old thinking cap on. Were are they chasing sand eels or small fry? They were definitely chasing something! I went through all my boxes, found some sand eel patterns, threw them into a salmon fly box which had bits & pieces in it, grabbed a 9 weight rod which I use for Bass got into the car and went back to the estuary. 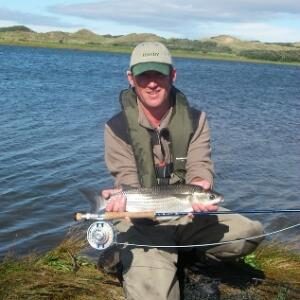 I went up the shore, sand eel pattern on, fish approaching, cover front runner, Fish on. Fish off! This happened a dozen times. I then kept cutting the sand eel pattern tailback, then the savage takes stopped. I was going off my head. I just couldn’t work out what was happening. Then for the hell of it, yes, in the salmon box was a size 16 Curry’s red shrimp pattern. Fly on!! shoal approaching, front runners pushing stuff up, covered with fly, long straight draw on the line, Bang!!!! rod practically wrenched from my hand. Off it went and went and went, full fly line out through the top eye, backing screaming off the reel, blood flowing from my line finger 80yards backing gone. The missile decides to turn and head back at me, and I’m running backwards to keep the tension on the fish. Eventually 15 minutes later a 6.5lb bar of silver-grey powerhouse into the net, size 16 Curry’s red shrimp in the side of a car tyre lip.

These fish do not have soft mouths as often heard amongst the angling fraternity, it is in the name ‘Thick-Lipped Grey Mullet’, think about it! Fish returned to fight another day. I then sat down, shook for while and watched another pod moving towards me. Could it work again only one way to find out? I did exactly the same as before BANG similar fight (so the 1st one was not a fluke) HAPPY DAYS!!! 5 minutes later 2lb Mullet.

Time to change the fly, just to see? On goes size 16 Bann Special another 4 fish in the net, the last one I dispatched to eat and also to check the stomach contents. Yes, you guessed it, it was crammed full of sand shrimp!!! These were the little things sprinkling or fleeing the mighty Mullet. Since that day roughly 5 years ago I have landed hundreds of Mullet with this method. I strongly recommend the use of a 9 foot 8 or 9 weight rod as I have experimented with 6 and 7 weights which I find are nearly impossible to set the hook with, you need something with a bit of backbone. My preference is a Hardy Zane 9ft 9 weights with a Zane No 1 reel. Also, saltwater proof large arbour reel with a serious amount of backing attached with a full floater line as double-figure Mullet or even from 5 pounds up will test your equipment to destruction. Leader material consists of 10 feet of 10 or 12lb Fluorocarbon. Fly selection is dictated by weather conditions the flatter the water the smaller the pattern i.e. 16 for flat calm and 14 when there’s ripple or wave on it. Chop and change your retrieve, think what the sand shrimp does and how it moves. One more tip that will hopefully bring you success is once you feel anything at your line strike as hard as you can, as if your life depended on it, you have to set.

Leslie Holmes, the author, runs a successful professional guiding business specialising on Mullet and Sea Trout on the fly on the Lower Bann Estuary from Stone Falls Specimen Trout Fishery & School Of Fly Fishing which he runs and owns at 63 Altikeeragh Rd Castlerock Co. Londonderry BT514SR. He is a member of the professional angling guide and instructors network (www.pagin.net), A member of Game Angling Instructors Association (G.A.I.A) and holds A.P.G.A.I (Trout and Sea trout) and Level 2 Certificate in Coaching Angling. Leslie can be contacted on 02870848380 or 07921463396 or Email info@stonefalls.co.uk or visit his website at www.stonefalls.co.uk. Full packages including accommodation can be arranged.