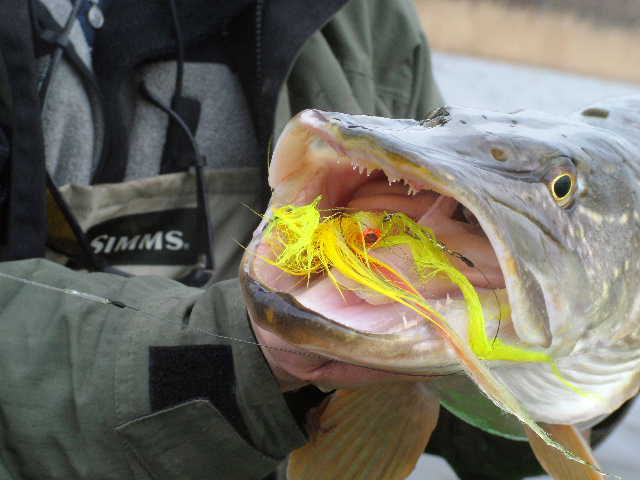 An article by Ceri Thomas.

Catching Pike on the fly is one of the fastest-growing branches of the sport. Pike are a true sport fish which fight very hard on fly tackle, the old adage that Pike doesn’t fight is total nonsense, they are one of the fastest fish that swim in our freshwaters, and in the spring and summer with warm water temperatures, they will tail walk and leap just as readily as a Sewin or Trout, and whilst not making long screaming long runs they will rush and pull with bulldog tenacity with almost unbelievable strength.

Most fly-caught Pike generally averages between 4 and 8lb, with a double-figure fish being on the cards at most venues in any one session. Most Pike less than 10lb are male’s known as Jacks; any bigger Pike is normally a hen fish. The maximum size is above 40lb, and fish up to this weight has actually been caught on fly tackle! They make a great alternative to Salmon, particularly with the state of the stocks at the moment and they provide a similar ‘big fish’ thrill. They can often be caught in conditions that would normally be hopeless for Trout, in flat calms and hot bright sunshine. They are not a particularly difficult fish to catch if some simple guidelines are followed.

The optimum rod would be a 9-foot #9 or #10 weight, the heavy line rating is needed to punch out and turnover outsized flies. 9-foot proves less tiring to use all day than a longer rod due to less leverage on the arm. To cast the big flies use a slower stroke than usual with an open loop, ‘Belgium’ style.

As for reels, anything that will accommodate the line with about 50 yards of backing will be fine, your normal trout reel 6/9 size will do. You need not worry about too much backing, as the Pike will not run hundreds of yards when hooked.

On fly lines, I would say a fast glass intermediate is the most useful followed by a floater. A DI3 is also helpful if fishing over deeper water. The fly lines should be of a specialist taper designed for big flies, I use the Airflo cold saltwater and 40 plus extreme ranges.

A wire trace is essential, there are several types on the market, the most satisfactory of which I find to be the Airflo predator poly-leader which incorporates a titanium trace with a snap link which makes changing the fly a simple business. They also never kink unlike some other types meaning that they last practically forever.

Flies need to be on the large size, I generally use 4/0 to 6/0 wide gape chemically sharpened sea hooks, with a total dressing length of perhaps 6-7 inches. Flies as small as 4 inches will catch Pike, but the bigger stuff tends to attract a better stamp of fish. The fly needn’t be a perfect imitation of a prey fish; a hank of crystal flash tied to hook will and has caught good Pike. Surface wake lures can also be deadly which I tie with a big lump of Plaztazote for the head.

The takes to surface lures are often incredible in their ferocity and are without a doubt one of the most exhilarating things in fishing anywhere. The best and most consistent colour is yellow.

Pike generally lie in shallow water within 20 yards of the bank; this is where the most features are and therefore their food. Cast to any structure you can find such as reed beds, logs, rocks, drop-offs, jetties, lilies and so on. The Pike is often tight in on the edge of such cover in surprisingly shallow water. The key is to cover as much water as possible, the Pike is not a selective fish and the chances are they will attack as long as they see the fly.

The retrieve is not normally a fast strip as you might think but rather a slow twitchy figure of eight interspersed with long pulls and pauses. This seems to be the most effective retrieve for them. The take to subsurface flies is usually a drawing away of the line much like a trout taking a buzzer. Set the hook by strip striking, pull the fly home into the Pikes mouth – do not lift the rod straight away or you will miss the fish. If you do miss one cast for it again as they will usually come back for another go.

I remember one instance where my boat partner actually hooked and lost the same Pike twice only for it to take my fly on the third attempt! Takes to surface lures are usually an explosive affair which may cause you to strike with a ‘knee jerk’ reaction: again what you must do is allow the fish to turn down with the fly before strip striking.

When hooked you can play the Pike as hard as you want, there is more chance of losing them if you play them lightly as they will dive into cover, also by bullying them you will ensure the hook is well and truly embedded into the hard jaw.

Once you have played your fish out you can land it by either netting it, gripping it behind the back of the head if a smaller fish (less than 10 lb) or by sliding the hand under the gill plate and gripping the bony lower jaw – ‘chinning’ as it is known. This is better suited with bigger Pike. Once landed unhook, handle and weigh as quickly as possible: Pike, despite the ferocious appearance and reputation is one of the most delicate fish when taken out of the water and need to be carefully revived until their strength returns before releasing them. Long-nosed forceps are must for unhooking as the teeth are razor sharp. The unhooking is an easy job with a fly compared to treble hooks on lures and dead baits.

Pike are found in a huge number of venues and are one of the most common fish in the UK with the cost of the fishing often being a lot cheaper in comparison to game angling. Good waters for fly fishing for Pike within easy reach would include Llangorse Lake near Brecon, Chew Valley lake Bristol (probably the best Pike water in the country), Bryn Bach lake near Ebbw vale, Dolygaer and Pontsticill reservoirs Merthyr Tydfil, Port Talbot dock, Llyn Brenig, the Wye and its larger tributaries, Talley Lakes Llandeilo, plus many more day ticket coarse waters, mountain lakes and disused reservoirs scattered all across the principality. For more information, simply visit the Fishing in Wales website. 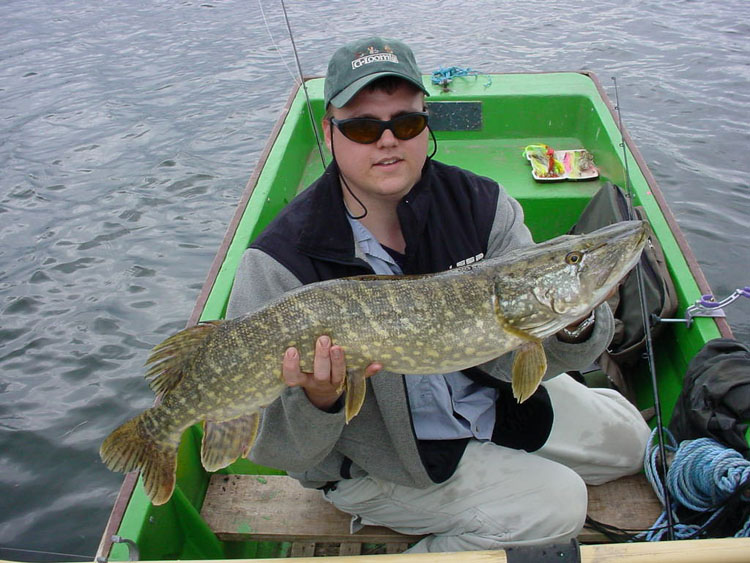 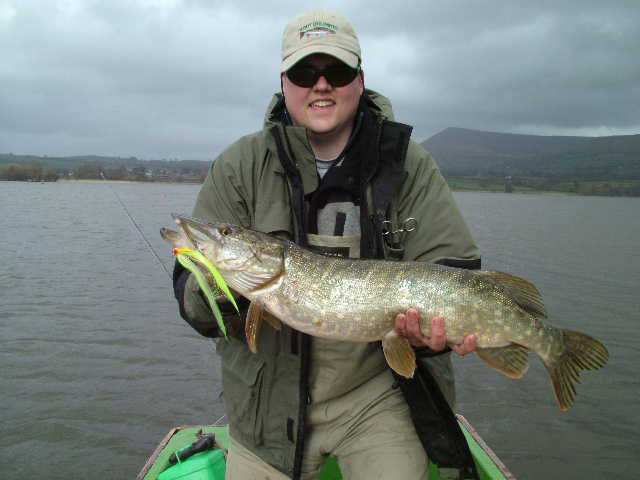