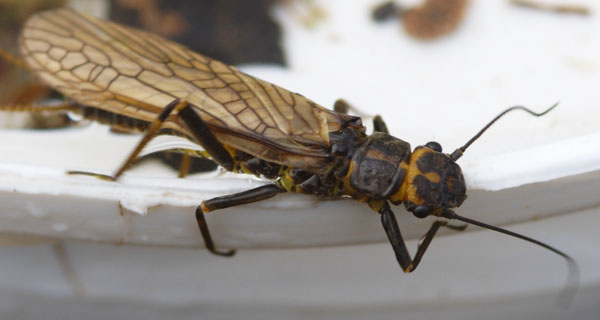 I thought it may be interesting for you to know what was swimming about our feet as we happily paddle about the river in search of trout. For that reason, I am going to do a kick sample of the river bed at both Ty Mawr and Llan Farm so you can be aware of what is in the river that may be on the trout’s diet.

The first kick sample was conducted on Monday 17th April 2006 at Llan Farm. I will also try and add what insects are in the air at the time but that is sometimes easier said than done.

Here are the first lot of insects of Interest.

These are a common sight at this time of year and are often found in your bag when you get home as they love to crawl into dark space’s.

There are two distinct types firstly the wingless-type which has very short wings and secondly the winged type. As you will see from the below images, they are effectively the same insect but one has longer wings. The trout occasionally take them when they drop on to the water.

Remember that the colours of the below nymphs are seen brighter when viewed from above as they are on a white background. In the river, they would reflect the colour of the stones or rocks where they would be hiding. 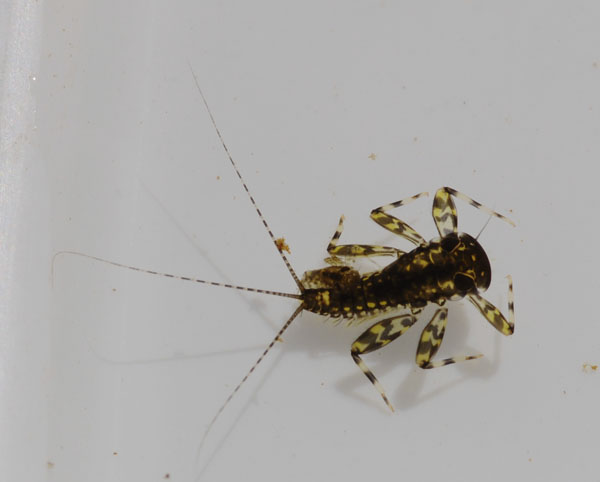 Whereas olive nymphs tend to be stone clingers, Mayfly nymphs swim vigorously by wriggling their body up and down.

There are numerous types of caddis larva and here are two of the most common. Firstly, the cased caddis which as the name suggests builds itself a case from sand and grit from the river bed, and secondly the Rhyacophila, a free-swimming and very aggressive caddis.

Below are a couple of photos to show you they are almost a centimetre in length and curl up and then spring open in order to move quickly. They appear almost hairy but these are sets of gills that protrude along its body.

I hope you have found it interesting. The next sample will be taken in a couple of weeks from Ty Mawr.